Copies of the booklet may be purchased from the Clerk to Wendron Parish Council
for £5.00 postage included

They are also available from the Star Inn Porkellis 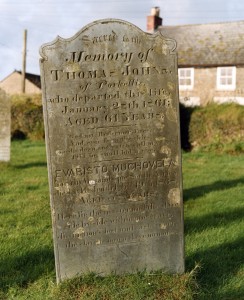 A memorial in the churchyard opposite Wendron church has a curious tale to tell. In 1838, Porkellis miner Thomas Johns was working in Rio de Janeiro and bought a seven-year-old slave boy, Evaristo Muchovela, originally from Mozambique. When illness drove Johns homewards in 1860, he offered the African the choice of staying in Brazil as a free man, or coming to Cornwall to live with him as a paid servant. Evaristo chose Wendron over Rio, but soon after, in January 1861, Johns died of consumption. Alone, in an alien country, Evaristo took lodgings with retired farmer Joseph Gundrey in Porkellis, and went to work for cabinetmaker William Wales in Redruth, who considered his apprentice a first-class workman. Seven years later, Evaristo succumbed to the same disease, and was buried in his former master’s grave: ‘distinction’s lost and caste is o’er, the slave is now a slave no more.’ Inspired by the grave, Helston writer Patrick Carroll wrote the play Evaristo’s Epitaph, broadcast on BBC Radio 4 in 2002. 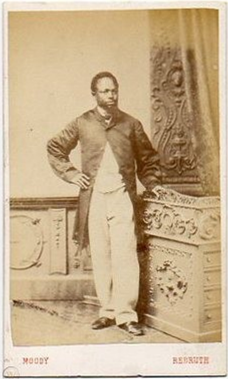 Photo of Evaristo Muchovela
by J. Moody of Redruth